Home / Blog / art / The Villa of the Mysteries, Pompeii

Looking into ancient Greek and Roman visual art, I recently discovered a curious location that is part of a UNESCO World Heritage Site in the comune of Pompei, near Naples, in the Campania region of southern Italy. Situated on the outskirts of the ancient city of Pompeii, the Villa dei Misteri or “the Villa of the Mysteries” was buried in the eruption of Mount Vesuvius in 79 AD, excavated around 1909 and restored between 2013 and 2015.

The villa is famous for one particular room—containing dazzling red frescoes that show a religious ceremony. Ancient Rome is known for its murals or wall paintings. This form of art has a long history in the Mediterranean, where the Minoans, a pre-Greek people of the Aegean islands, regularly used it as early as the mid-second millennium BC.

The frescoes in the villa, dated to 70-60 BC, are believed to depict a rite associated with a “mystery cult” of Dionysus or Bacchus—the god of wine, fertility, theatre, madness and ecstasy. Greco-Roman mystery cults were religious schools reserved for initiates known as “mystai”. The details of membership were not revealed to outside parties.

In the red paintings, we most likely have a bride who is being initiated into the Dionysian/Bacchic Mysteries in preparation for marriage, her elaborate costume being a wedding dress. We cannot know the exact meaning of the paintings. There have been several interpretations.

In the first scene, a boy—standing before a priestess—reads from the scroll. The initiate enters in purplish apparel. She is also shown leaving in darker, slightly different clothes, now with a wreath and a tray of sacramental food.

In the second scene, the initiate, the priestess and an assistant weave a basket. On the right, Silenus plays a lyre. (Silenus is a folkloric figure of the forest who is a man with some features of the horse; he is a companion of Bacchus.)

In the third scene, two more characters appear: a satyr (drunken, male nature spirit) plays panpipes and a nymph (minor female nature deity) suckles a goat. The initiate is in a dramatic pose. She is probably in the process of establishing a close connection with nature, leaving the human world to immerse herself more in her animal side. This psychological shift is needed for regeneration and rebirth in ancient rituals. The initiate is absent from the next two scenes—which means she has undergone “katabasis”, which is a kind of journey or descent. From the country to the coast or down into the underworld.

In the fourth scene, Silenus holds a bowl. One satyr looks into that bowl. Another holds a mask (resembling Silenus). This is a strange and intriguing tableau. The bowl could be a vessel of divination, giving a vision of the future—possibly of death. Maybe the death of innocence and childhood that the initiate must submit herself to.

Next, in a damaged part of the fresco, we can see Dionysus leaning onto his mother Semele. In scene six, the initiate appears. She is wearing a cap now and has a staff, signs that she has reached a new stage in the initiation ritual. She is reaching for a long object covered with purple cloth, placed in a basket (perhaps a phallic symbol or a signpost of some sort indicating a new discovery). On the right is a winged figure—Aidos, the Greek goddess of shame, modesty, respect and humility.

In the seventh scene, the initiate kneels before the priestess. A female figure whips her, another one dances. It is as though this is some kind of final test of strength, and a cause for celebration is at hand.

Eight and ninth scenes show completion. The initiate is in new clothes, an assistant behind her. Cupid shows her a mirror. Then, she is enthroned, Cupid again by her side.

The logic behind mystery cults is interesting. In a book titled The Greco-Roman World of the New Testament Era (2009), historian James S. Jeffers writes: “The state religions of the Greeks and Romans proved unsatisfying for some. Those who longed for a sense of salvation, and for a more personal connection with a deity, often looked for them in the mystery religions.”

The appeal of these frescoes lies in the very fact of their being beyond full comprehension. They attract the viewer with their sense of secrecy. They also engage as they exhibit a timeless human impulse—to achieve a kind of maturity, an elevation of the spirit, a connection with the divine in some form. 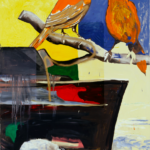