In the early 1990’s, while working in a part time job with the installation team at the NGV, an artwork by Eva Hesse, No Title 1963, struck me as being a successful echo of some of my own struggling artistic preoccupations. It was unlike anything I had encountered before. Or rather, it has elements of things I had encountered before but scrambled together in a way I hadn’t seen, at least in the flesh. The explosion of new unbridled painting in the late 1970’s and early 80’s, a lot of which can now seem dated and ego driven, had ended in a suspicion within the curatorial circles of the International and Melbourne art worlds of painting as a viable way to move forward. However with this explosion, the seeds had been sown.

Also at the time a small book of the work of the German artist Martin Kippenberger caught my eye in the NGV bookshop and I was instantly intrigued with this work that also scrambled styles, in a more brutal way than Hesse but with absurd humour and pointed intent. It seemed to be a way forward and at this time the Hesse picture, for me, joined the dots back in time to an idea of multiplicity and possibilities rather than the notion that an artist must choose a single branch in the great arc of art history.

Eva Hesse’s No title 1963, gives me the feeling that the artist has decisively chosen to not choose and has preferred to combine the orthodoxies of the day – gestural abstraction and hard edge colour field. Both in danger of becoming clichés and each burdened with their tribes of patriots. Hesse could see, possibly subconsciously, that to break this binary would open again the doors of perception. She brought a voice of Dadaism into the mid-century and as a female artist in New York’s heavily competitive male dominated art scene there was a desperate need for new voices to challenge this status quo.

No title 1963 is painted with oil on canvas, The texture of the ground and paint surface is fresh and directly worked- almost like a large work on paper. To achieve this fresh aliveness demands sure direction and confidence, remarkable here as Hesse was apparently quite unsure of her painting abilities and became more renowned for her sculpture- a form less reliant on the sensitivity of touch in the moment of making that comes to the fore in this painting.

On close observation the gestural expanse is composed of rectangles of hand’s width sized marks resembling a scrawling handwriting in greys, ochres, whites and one rectangle in the lower right mainly in blues that pulls the eye down in a cascade from top to bottom. Squinting at the painting, similar to the Sansom painting I discussed last time, the stabbing black chunks punch holes in the surface and give tension and spatial definition to the murkier indistinct scrawling blather. With easy humour that challenges abstract expressionism’s claims to the sublime this dynamic gives articulation to something inchoate and absurd. The one element that completes and adds greater complexity to the chromatic and spatial world is the pinkish brushstroke running from top right to midway. This is echoed with a similar angled white line tucking behind a gestural moment and delving into a dark aperture. Directing this play of forces is the massive intrusion of hard edge wedges of industrial lemon yellow, white and warm ultramarine and cooler teal blues painted toughly yet with give at the top of the canvas. This is a wonderful play on one of the cornerstones of creating space in Western painting- the misty background of a Titian or the Mona Lisa cut over with a more sharply defined figure – here unsettled and topsy turvy.

Despite the vast history of artists pulling the language apart, the state of repose, or at least coherence, seems to be one of the most sought after qualities in art. It’s still really surprising to me that in No title 1963, the hot struggle to resolve the inconsistencies yet keep them living and breathing relaxes into such a natural repose. Contributing powerfully to this resolve is the way the division between the flat wedges and the looser paint below is essentially flat- the primacy of the surface, as the ruling critic of the day Clement Greenberg expounded, is insistent but sneakily there’s a blackish zone that appears to slip behind and under the leading edge of the white triangle.

In writing about this work I’m surprised how I feel like I’m writing about a painting concerns of my own, however it’s now almost 60 years since Hesse painted it and realise it’s more productive to think about connections and shared ideas and sensations than the delusion of originality. Hesse was a great originator about how the grotesque, awkward and absurd, both visually and psychologically, can be incorporated into a materially rich art. Surrealism, Dadaism, Automatic drawing and writing, the idea of the unconscious and more had come before her but she managed in her short life to bring threads of the play of these forces into an agreement with the demands of the highly tuned modernist mid-century New York art world. She proved that the idea of a single way forward is mere convenience amidst the flux and flow of our contemporary lives. 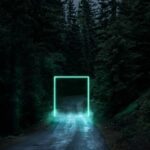 Windows and Portals: Looking Beyond 2020