How can paint hold such suffering and still remain paint?

Home / Blog / art / How can paint hold such suffering and still remain paint?

George Gittoes: Rwanda
I’ve never really forgotten George Gittoes’ Rwanda series of works from the mid 90s. They describe the sort of thing that one can’t forget. Gittoes was present the year after the Rwandan Genocide of 1994 and witnessed the retaliatory genocide at the largest camp for internally displaced persons, Kibeho, in south-west Rwanda.
Charles Nodrum Gallery, almost opposite our studios on Church Street, Richmond has been showing some works from that series and I had to see them. This was the first time I have seen them as a group of works, consisting of some large paintings, photo-based works and drawings.

I didn’t really look at the photos; at a glance I knew what I would see there. I went to see the paintings. While they seem to screen the intensity of the violence in expressionist swathes of colour, they simultaneously are a study of violence, of suffering and of what remains afterwards. They are entries into the shocked immediacy of the victim’s experience while bearing traces of the artist as witness. Mine was a quick visit, but it left me reeling for the next couple of hours.
Strange really, because art does not normally effect me much. I have a love for art that seems to exercise itself in front of the simplest of works such as a student’s painting or a child’s drawing, but I don’t know if I believe in art’s capacity to change the world anymore. I was once a believer, the idealism surrounding the art I had seen as a boy, had never left me, The hand of Christ from Michelangelo’s Pieta (another victim) fascinated me. How could something be living flesh and marble at the same time?
When Gittoes made a choice to draw survivors that had been attacked with machetes and knives, he made a very brave call. There in the midst of the carnage, with many needing help, he drew. He had decided that his role as witness and art’s ability to translate and broadcast what had occurred was of primary importance. I’ve asked myself if I could do the same, could I live with the consequences of that decision? The haunting afterwards? While I am strangely overwhelmed by the work, I have wondered whether I believe in art that much.
I cannot resolve another thought. How can paint hold such suffering and still remain paint? What intensity of suffering does it take to spill so searingly through that object on the wall that we put a price tag on? How does a painting hold and yet not hold this unanswerable suffering?
The act of painting and the intense focus on the survivors of the violence moves us from the typically documentary style representation of the crime as we see it in the media, to a more transcendent meditation upon that which lies within ourselves. We recognise perpetrator, victim and witness within ourselves and hopefully we build a greater awareness of ourselves. Gittoes has frequently ventured into violence and human suffering. He has embraced the darkest corners of our humanity and held it up to us. We need a witness to bring about justice and Gittoes’ work has been in a sense, an optimistic, possibly redemptive act in the role of that witness.
Exhibition details:
George Gittoes: Rwanda
2 – 25 June
Charles Nodrum Gallery
267 Church Street, Richmond
On the final day of this exhibition from 4pm-6pm, you will be able to hear the artist recall his experiences of the Rwandan Massacre in 1995 and how he translated these events into the paintings on the gallery walls.
Charles Nodrum will also say a few words, and both will take questions.
George’s wife Hellen Rose will perform two songs in the traditional Afghan folk style.”The Gambler” & “Black Dress” are bilingual – in Pashto and English – and are collaborations with local women of Jalalabad who work with both Hellen and George at The Yellow House.
Written by Marco Corsini 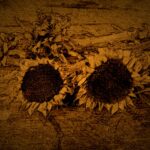