I was lucky enough to be in France in May this year and ticked off a few things from my bucket list (read here about visiting Arles and Van Gogh). High up on the list was to see Monet’s water lilies at Le Musee de l’Orangerie in Paris. This small museum is not part of the mainstream tourist route, especially when most people do not have long in the city and try to cram in all the must-see sites in a few days. However, I think the l’Orangerie should be added to the list (though not to everyone’s list because it will get too crowded)! It is not only historically and artistically significant; it also offers some respite from a busy day of being a tourist.  Though you can only truly understand this until you visit…
Paris’ impressive L’Orangerie building, which was used to billet WW1 soldiers who were on leave from the trenches, has housed Claude Monet’s monumental water lily paintings since 1927.

Monet was invited by then French Prime Minister, and friend, Georges Clemenceau, to display his large-format water lilies, which he began working on in 1914. This project consumed much of Monet’s later years and he worked on them until he passed away in December 1926. A second floor was built at the l’Orangerie, which blocks natural light, intended for the water lilies. They were installed a year after his death.
You have no doubt seen images of the building: two oval-shaped rooms in which you can stand and be immersed – 360 degrees – by Monet’s expanse of eight water lily paintings. As soon as I stepped into the first room, I was moved to tears. As much as it is a cliché, images do not do Monet’s paintings justice, nor the room itself. This is what I mean by offering some respite from being a busy tourist. Monet’s intention was to create “the refuge of a peaceful meditation in the center of a flowering aquarium.” There are seats along the middle of both rooms where you can sit and feel like you are enveloped in Monet’s blues, sweeping greens and expertly brushed water lilies. The first room displays the water lily paintings that most people are familiar with and have been used for countless merchandise items (yes I do have one of those notebooks…).  People say that this room evokes the feeling of dawn, with its light blues and peach hues.

The second room houses some water lily paintings I had never seen before. This room felt like it was darker, with thick tree trunks dominating surprisingly large portions of the paintings, and sweeping dark green branches. People say this room evokes dusk. I would have to agree; the blues and greens were noticeable darker and the entire room felt cooler. The paintings affect the feeling of the room – for me, the room only exists to experience the water lilies; you could forget where you were when surrounded by them and take in a moment that is truly the present.
If lined up side-by-side, these eight paintings would measure a huge 91 metres. Monet said that he wanted to create “the illusion of an endless whole, of water without horizon or bank.”  And not only does the room allow you to stand back and let all his brushstrokes form his recognizable garden (or the feeling of it), you can walk right up to them (there is not glass protecting them) and see how his water lilies were formed – with three of four perfectly placed red brushstrokes that seem to have been painted at random. If you are ever in Paris and cannot make the day-trip to Giverny, I urge you to  make time to visit L’Orangerie.  You will be able to imagine what his country garden is like by simply standing, or sitting in these two rooms – and experience what was Monet’s world.
Written by Lauren Ottaway. 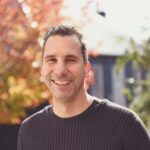 2015 reflection – Growing into the creative mystery