Gnarly eucalyptus trees often seen on a well-travelled stretch of road near the town Buangor, in country Victoria, was the starting point for Tim McMonagle’s latest exhibition. Buangor is a collection of five oil-on-linen paintings, painted on McMonagle’s preferred square format.

Each painting consists of one tree in a uniquely contorted form with hints of vitality depicted in the occasional sprouting green leaf. The colours are mostly muted browns, pale blues and greys, mustardy yellows and olive greens. McMonagle added intricate details to his mesmerising trees; hints of vibrant oranges and yellows and texture with brushstrokes and thick paint. An energy is also present, particularly in Pull the Cup 2016.
To paint the twisted, mythical old trees, McMonagle relied heavily on his imagination, but also on a soundtrack to get him into the painting process. “It’s the music that got me into the right head space,” he says. “I put this on everyday I painted.” He is talking about the album, At Action Park by Shellac, an album that’s been described as rock, post-hardcore and punk. The influence of the music is evident in the dynamic and somber elements of the paintings. To expand on this, McMonagle borrowed song titles to name his paintings. 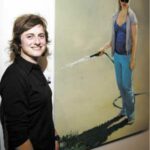 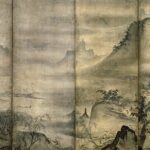