How Artists Could Explore Climate and Ecology

Home / Blog / art / How Artists Could Explore Climate and Ecology

As we all know, important discussions around climate change and the ecological crisis have been around for the last two to three decades. In my memory, what sticks out are media like Michael Jackson’s Earth Song (1995) with its unforgettable visuals of burning deforested land and the movie The Day After Tomorrow (2004) with a frozen New York City. I also think of the 2006 documentary An Inconvenient Truth by former US presidential candidate Al Gore and Pope Francis’s 2015 encyclical Laudato si’: On Care for our Common Home. Justin Trudeau’s deep disappointment over the Trump administration’s withdrawal from the Paris climate accord in 2017 is one relevant event from the world of politics that I remember.

In the past few months/days, the debate around the issue has become more urgent and forceful—with massive fires in the Amazon and Australia, and Greta Thunberg’s passionate activism exploding over social media and reaching the Davos elite. February 2020 and Jeff Bezos, the richest man in the world, has finally pledged $10 billion to save the environment after countless appeals and demands.

How are artists to participate in this crucial discourse? How should they contribute? What new perspectives and practical tools can they offer? These are matters I have been interested in for a long time. I have found several noteworthy creatives, galleries and museums doing thought-provoking work—but a lot more needs to be done in this area.

The first thing, I believe, that could be considered is that we have had plenty of calls that have brought attention to the damage already done and its possible consequences. They come as news items that evoke “guilt” (example, a bird covered in oil from a British Petroleum spill in the Gulf of Mexico) or frightening, apocalyptic scenarios that serve as “warnings” (example, Stephen Hawking predicting rains of sulphuric acid and temperatures of 250C before his death). Earth Song and The Day After Tomorrow also fall within these categories. Such an approach in art—that focuses on the negative—as I have written in a previous article (https://melbourneartclass.com/art-more-as-proposition-than-protestation/) can certainly be effective as it acts as a loudspeaker and highlights pertinent matters.

Many artists till now have followed the guilt/warning route and come up with interesting exhibits. Spanish artist Isaac Cordal is known for sculptural installations in puddles that show half-submerged figures looking like politicians or corporate men. So engrossed are they perhaps in discussing trade deals and driving the engines of industry that they fail to realise the criticalness of global warming. Danish-Icelandic artist Olafur Eliasson has hauled 100 tonnes of free-floating, glacial ice from the waters of the Nuup Kangerlua fjord in Greenland to public sites in London and Copenhagen. Concerned about rising sea levels, Washington, DC-based artist Noel Kassewitz makes buoys and floats for disaster preparedness.

But protest is incomplete without proposition, I want to repeat. Exposure (what has been done wrong) must be complemented with recommendations (what could be done right). It is the other side of the narrative that must be emphasised—new ways in which we could see the environment, useful measures we could adopt to ensure that the delicate cycles and chains of nature remain undisturbed and are, rather, reinforced. I want to mention four artists whose works we can consider in this regard with reasons as to why:

Courtney Mattison, who has an academic background in marine ecology and ceramic sculpture, has been making large coral reefs. She marries scientific detail with artistic prowess and shows the underwater formations in all their varied and intricate beauty. Mattison is an ocean advocate who wants to inspire policymakers and the public to conserve our changing seas. So much of global visual culture is anthropocentric—concerned only with human needs and wants. Mattison’s work is special because it shifts our viewpoint and, with professional seriousness, gives centre-stage to an ecosystem that, even though is distant from us, remains susceptible to damage by our activity.

Alma Heikkilä gives audiences a symbiotic view of life, that is, she underscores the complex, interdependent dynamics between humans and other organisms, including miniscule microbes. In her paintings, she zooms in on bacteria that are everywhere, in and around us, and are absolutely essential for our survival. It is her belief that “in order to combat climate change we need to stop thinking of humankind as unique and individual from other life forms.”

Fusing art with the worlds of engineering, architecture and the natural sciences, Tomás Saraceno lays out innovative models of design and ways of living. His vision of Air-Port-City and “cloud citizenship” take us to floating metropolises made of cell-like structures with elastic boundaries powered by solar energy. His projects “In Orbit” and “Aerocene” have further explored the possibility of an airborne existence.

Finally, Ernesto Neto produces work that engages all our senses and blurs the boundary between artificial and organic. His installations are often made up of nets and cocoons and may also contain substances like spices and sand. Plant-like and root-like, the works take us further into the soil, rather than away from it. They offer a corrective to the modern buildings of hard concrete, glass and steel that can make us feel alienated and cut off from the beauty of nature.

All four artists pick up on human fault but leave us with a positive message and feeling, enabling true reflection and/or reasonable action. They go beyond judgment and provide solutions. 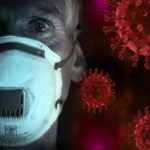 Lessons in the Time of Corona 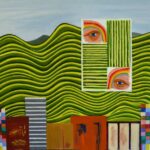