Driven by a freight train of a mind, Luisa Blignaut’s acrylic paintings frequently and impulsively veer off track into unexpected, fertile territories.

The painting After Anaesthetic describes the minutes after Luisa woke from surgery and looked out of the Box Hill hospital window towards the Dandenong Ranges. Below is the city, with geometrically abstracted buildings. Luisa paints her reflection in the window where the rolling mountains and hills stop for the self portrait which is itself a geometric construction and traced by rainbows. Luisa has described this experience of waking and then slipping away again to wake again in another room.

“It was a rainy day and I saw a rainbow when I opened my eyes. I closed my eyes and when I opened them again, I was in another room, remembering the rainbow.“

The hills musically echo the rainbow, as if Luisa has recognised herself somewhere within them, somehow, in the rainbow also. A part of these elements but aware of self as constructed, geometric, like the buildings. This seems to be a description of a slipping in and out consciousness, from apparent void into self. To be both separate from things and a part of all things, a sense of the tentative and the universal, of being in-between. The in-between of things characterises much of Luisa’s work.

Luisa has a deep love for contemporary classical music, experimental music and jazz. She finds joy, meaning and integrity in improvised and experimental music. She frequently parallels natural textures and patterns with musical ones. In Bark Blues, subtle tones and textures correspond as much with music as with the bark of the trees, the title being a play on both texture and rhythm. Music and the improvisation of blues and jazz give the best insight into Luisa’s working process. Luisa has said that she “thinks all the time when painting, whilst thinking nothing at all at the same time“. Of all Luisa’s quotable quotes, this is my favourite. She also describes this as a “conversation between cognition and intuition displayed on a canvas with paint and brush. Brush strokes explore, discover and react. The resulting paintings are spontaneous and improvised.” Bark Blues describes Luisa’s way of thinking and working in a wonderful mixture of spontaneity, musicality and visual revelry.

The painting Polyrhythms uses the landscape to describe a musical composition which combines contrasting rhythms. As with Bark Blues we are seeing the two elements, visual and musical simultaneously. Each element of the landscape – sky, sea, beach, coast and even the poles have their own rhythm which simultaneously contrasts and seemingly harmonise with each other. Luisa has created the visual equivalent of a complex musical technique.

European Bee Eater, Thorns and Namaqua Spring all directly reference Luisa’s South Africa. Luisa was a frequent bird watcher and walker. Each of these images translates Luisa’s memories into a play of colour, form and space across the canvas using direct spontaneous brush marks. Thorns, uses the native vegetation to create a patterned abstraction as a homage to South Africa. Likewise, the intensity of colour in Namaqua Spring is extremely subjective, referencing an intense personal connection to a place where Luisa frequently found solace during turbulent years.

Hay Fever Near Coober Pedy, references Luisa’s experience of driving across Australia’s Nullarbor Plain whilst suffering hay-fever. It is as intense in colour as Namaqua Spring but more topographical in its structure, appearing to describe a spatial vastness.

The work, Maybe somewhere else, has a blue band of light at the centre which splits the composition top to bottom as if universal and all encompassing. The warm orange and reds surround the cooler blue. What is, Maybe somewhere else? Perhaps, for moment there is a pause here, a reflection of what lies outside the immediate and the material. As painting it contains an integration of all the elements discussed so far, organic, memory, visual and musical, but then asks a very seemingly simple question, what else and where?

As with After Anaesthetic, the painting Conversation combines the human face with natural elements, in this instance the textures of the bark of a tree. The eyes double as knots in woodgrain, and the simplified rhythmic forms also seem to reference music. This is a painting which knows no constraints. Is it a portrait or portraits? Yes. Is it comical? Yes, and also dry. Wry? Yes, but not cynical. It is biographical but altruistically, in that it is generous to the self and others. It appears to describe a moment of frustration without being mocking, drawing out the comical elements of the situation. The works brilliance is in bringing tree bark, the face(s) and social interaction together successfully into an expressive artwork.

A series of paintings which Luisa entitles wth the word Bifurcation use the same simultaneous integration/separation of elements we have seen elsewhere in Luisa’s work. These abstract paintings, limited to two colours/tones play two fields against each other. Which colour is the top layer? We can’t quite tell because they shift and refuse to be grasped. Bifurcation means the division of on element into two. These two fields are both one whole organism which refuses to allow distinction of its parts and also, two elements. The apparent simplicity of these works hides a tactical resistance to being defined.

Luisa’s works often combine elements of landscape and abstraction; rich memories from her original South Africa, and of Australia combining with her extensive musical knowledge. They form intuitive contingencies to hold together elements which become deeply biographical images. The works feed off a great depth of experience which is channelled through spontaneous painting decisions, making them appear disarmingly simple. Yet they contain complex strategies that are intriguing in their visual and conceptual structure. 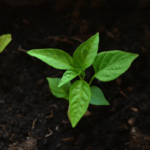 How Artists Could Explore Climate and Ecology 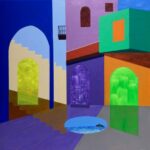