Van Gogh and the seasons has been the fastest selling show in the history of the National Gallery of Victoria. Over 150,000 people visited the exhibition during the first month. There have been a number of people comment that they had expected to see Sunflowers, or Starry Night, and they were surprised by his darker work. As Van Gogh’s artistic career only spanned 10 years, only finding his most well-known style two and a half years before his death in Arles, we are taking a closer look at his earlier works. The years of study preceding the painting of Still Life with Apples and Pumpkins in 1885 play an important role in the establishment of Van Gogh’s dynamic style and the paintings that have become household names.
Under Anton Mauve’s short-lived tutelage, Van Gogh was introduced to still life objects. Normally a painting teacher would make their student study the work of another artist before they began their own compositions. Mauve, however, set up still lifes for Van Gogh, including apples, pumpkins and cabbages. This appealed to Van Gogh because, for him, they symbolised the harvest, and peasant life.
Van Gogh was living in Nuenen at the time he painted Still Life with Apples and Pumpkins. This was a particularly prolific period of his life; he produced 195 paintings, 313 drawings, 25 water colours, and 19 sketches in his letters to his brother Theo. [1]
Studying still life was not only cheap for Van Gogh (he did not have to pay for a model to sit for him), it also provided exercises in exploring light and how it affects colour. His palette was fairly limited, with mainly earthy tones, particularly dark brown. You cannot see any indication that this young artist would paint with such vivid colours, only two years later!
Van Gogh was aware that still lifes did not sell very well, however he wrote to Theo, “it is damned useful, and I shall continue to paint them this winter.” [2] You can see how Van Gogh has used the painting above as a very effective exercise in light and shadow.
Van Gogh also used still life to learn how to represent form using colour on the canvas. He applied varying tones of a limited number of colours to depict how the light fell and turned on the surface of objects to create planes, and form. Writing about his piece below, Van Gogh explained to Theo that he tried “to express the material in such a way that they become heavy, solid lumps – which would hurt you if they were thrown at you, for instance.” [3] 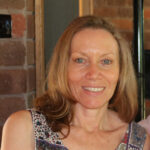 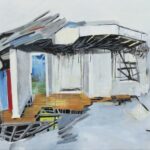