Guest blog – What is Art?

We are fortunate to have Luisa Blignaut, one of our dedicated and talented students, guest blog for us this month. 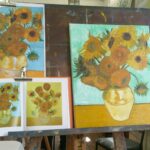