The magical effect of spring on artists

Home / Blog / art / The magical effect of spring on artists

Although the weather is lagging a little, spring is definitely all around us. Beautiful pink and white buds are appearing and then blooming so quickly, leaving a beautiful blanket of colour on garden beds. The trees are transforming with abundant new growth and the birds are becoming louder each morning. This is such a fleeting time of this season, so we thought we would showcase some works that depict spring and rebirth in different ways. We hope this time of the year is also inspiring you, too!

Claude Monet was one of the most prolific French Impressionist painters. Through Monet’s works, some of which were the same scene painted at different times of the day and year to reflect the changing light and seasons, you can clearly see the approach of capturing one’s perceptions before nature. In this painting, Springtime, you can also imagine Monet setting up with his easel in the fragrant, warm countryside capturing the early blossom of spring.

La Primavera literally translates to the season of spring. This masterpiece was commissioned by Lorenzo Pierfrancesco de’Medici and now hangs in the Uffizi in Florence. Venus stands in the centre of the canvas in a lush orange grove on a beautiful carpet of wildflowers. It is a celebration of the return of spring and the ripeness and fertility that the season brings as it awakens the world out of its cold, wintery slumber.
There are a number of interpretations of this work. Some believe that the woman in the foreground of the painting represents Primavera, the embodiment of spring. Others believe the figures on the right to be Zephyrus grasping at the nymph Chloris. According to myth, he married her and she was transformed to Goddess of Spring. And some see the figure with roses as representing the metamorphosis of Chloris to Flora.

Mary Cassatt produced many studies of young girls during the early 1900s. The child featured in this work is Margot Lux, from the village near Cassatt’s country home who modelled for Cassatt in more than fifty of her works. This image captures a fleeting instant of play suggested by the movement of Margot’s clothes slipping from her shoulder and bundling her dress in both hands – perhaps before or after running. The striking, pink flower in her bonnet and the warm background portray this beautiful moment on a spring day with soft application of paint and sensitive detail.

This work celebrates the preparation of the land as spring nears. It shows the community working together to prepare the soil, sow seeds and plant crops as the world itself wakes up from a cold, Flemish winter. Brueghel would take his father’s sketches and drawings (Brueghel the Elder), and would execute them in paint, and many of these works detailed the lives of Flemish peasants. This particular piece is a re-working of his father’s drawing of 1565.

Hokusai was a ukiyo-e painter and printer of the Edo period in Japan. He was inspired by Mt. Fuji and produced a series of thirty-six woodcuts depicting different viewpoints of the impressive volcano, entitled Thirty-six Views of Mt. Fuji. This work is part of that series and celebrates not only Japan’s national icon but its most revered season. Springtime is so heavily celebrated throughout the country that they have blossom reports on television during the weather report, complete with maps of Japan, which slowly turn pink as the whole country blooms. In Hokusai’s work, you can see the couple on the hill on a picnic blanket underneath the cherry tree; this is still a popular activity around the country and is the traditional way to enjoy the blossom in Japan. The other figures are dancing and celebrating the arrival of this vibrant and important season for Japanese people; not only is it meaningful for the farmers, the joy of spring is culturally ingrained

Renoir’s work is absolutely bursting with colour, vitality, and spring. This is one of Renoir’s earlier works, as you can see the precise rendering of reality (although there is an apparent looseness), painted before his great Impressionist works of the 1870s. This wild work lends itself to a country garden in spring. The brightness of it, glowing with light and colour indicates that Impressionism is just around the corner.

Sisley was there at the beginning of Impressionism with Pissarro and Monet, and a pioneer of the plein-air method and the movement’s aesthetic. Sisley’s work took on a new vitality when, due to financial reasons, he was forced to leave Paris and move to the countryside in 1880. He loyally worked en plein-air, which can be felt in his work, The Small Meadows in Spring. You will notice that there are no hints of spring blossom or wild flowers in this piece. It is his daughter painted in the foreground who represents the image of spring and new life.

The almond tree is one of the first to bloom in the southern regions of France and is a symbol of spring which can arrive as early as February. This beautiful, Japanese-inspired work was a gift for Van Gogh’s brother, Theo, whose wife had just given birth to their first child. The painting was meant to hang above their bed and represent new life.

We had to include a second painting of Monet’s in this list, because this piece captures such a beautiful moment of solitude, in nature, and also reminds us how important it is to disconnect and be outside. Featured in this painting is Monet’s first wife, Camille Doncieux, who, before they were married, was his model in the 1860s and 70s. It has been claimed that she also modelled for Renoir and Manet.
This serene setting, with the dappled sunlight dancing on her dress through the canopy of trees, the wildflowers in the foreground and patches of warmth in the background magically captures a special moment in spring.

Dutch-born Sir Lawrence Alma-Tadema was infatuated with Rome and the ancient world. A classicist painter, in this work he portrays the annual Victorian custom of sending children into the countryside on May 1, however, the scene is placed in Rome.
In this impressive work, he used his extensive research of the ancient world to depict the dress, sculpture, architecture, and musical instruments. The procession of figures adorned with spring flowers, playing musical instruments, and surrounded by townspeople above celebrating spring renders a spectacular and captivating scene.

Margaret Olley is a widely-recognised figure of Australian art and is one of the most significant still-life and interior painters. Ranunculus and pears is one of many Still Lifes she painted in her home, from which she drew inspiration. Many of her Still Lifes evoke the warmth and colour of spring. She also found beauty in the everyday objects she gathered around her, and most of her works feature pottery, art and exotica of her travels. She acquired many, many objects over her lifetime and her bulging studio almost became as famous as the artist herself! To outsiders, her house appeared chaotic, but Olley had actually arranged it like a Still Life.
Written by Lauren Ottaway. 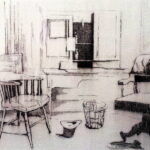 Have you asked Google “how to draw”?

The artist as receiver