Over the three months that Melbourne is home to an awe-inspiring collection of Van Gogh’s works spanning his life and representative of the seasons through which he viewed and painted the world, we will be taking a closer look at some of his works at the NGV.

In October 1884, Van Gogh sent a letter to his brother Theo, along with some small photos of his recent works, so that Theo (who was an art dealer) would have something to show of his work, if the opportunity arose. In the letter, he described Avenue of Poplars in Autumn as “The last thing I made is a rather large study of an avenue of poplars, with yellow autumn leaves, the sun casting, here and there, sparkling spots on the fallen leaves on the ground, alternating with the long shadows of the stems. At the end of the road is a small cottage, and over it all the blue sky through the autumn leaves.”[1]
From this passionate and intricate description alone, you can get a real sense of Van Gogh’s love for Autumn. It was his favourite season, and he wrote in 1882, “I sometimes yearn for a country where it would always be autumn, but then we’d have no snow and no apple blossom and no corn and stubble fields.” [2]
Van Gogh was living back with his parents in Nuenen, in Norther Brabant, at the time he painted this work. A few months earlier he had been living alone in northern Netherlands, and, driven by loneliness, moved back to his parents’ house. Van Gogh was drawing and painting fervently at the time and the darkness in this image would carry through to his future work.
He began painting in oils in the early 1880s and really enjoyed the medium. You can see the liberal application of the paint in the details of the textured lines used to create the tall poplars and the woman in the foreground. The vibrant Autumn colours and soft graduated sky, combined with the tall, dark shadows, create an undisputable feeling of the season – something which Van Gogh, over his short ten-year career, translated onto the canvas with genius.
The melancholic interpretation of the painting inspired author Greg Bogarerts to write Avenue of Poplars in Autumn, a tragic story of the lone figure in the painting.
[1] [2] Vincent van Gogh. Letter to Theo van Gogh. Written late October 1884 in Nuenen.
Written by Lauren Ottaway. 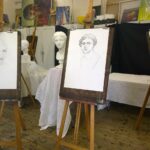 Huge progress made in our second beginners' Portraiture Class 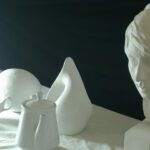