The idea of building a creative city has been at the forefront of how we imagine and develop cities like Melbourne for the last decade or two. As an artist, I’ve found this city creatively liberating and I’m thankful it has given me a place where my own skills have been developed and shared. However, at times, I’m made aware that I am living in the midst of suffering due to drugs or homelessness or mental health issues or some form of displacement. The recent reporting about injecting rooms and some of the associated conversations I’ve had with friends have highlighted the dichotomies present in our city. I do believe that working in a creative industry does build and enrich our lives and Melbourne supports this well, but how do we think about creativity in the context of the city that is often suffering?

There has been a significant influence upon our city policy makers concerning the role of the arts in our cities. In recent decades Richard Florida and Charles Landry have influenced many planners across the globe including those planning for Australian cities.[1] Florida’s book, The Rise of the Creative Class, has had a particularly big impact. Florida makes a connection between a successful economy and economic development based upon the presence of technology, talent and tolerance within that area. Florida’s argument is that in order to attract creative workers, that city has to have a lifestyle that is attractive to the new ‘creative class’. This ‘creative class’ values diversity and tolerance in the places they live. Florida says that companies will follow creative workers who have taken the opportunity to choose their location based on their preferences. For Florida, attracting and retaining talent rather than focusing on capital projects such as buildings and stadiums is the means to economic growth.

Rowland Atkinson and Hazel Easthope believe that there are significant reasons for the popularity of these ideas by Florida and Landry. They write, ‘First, the ideas of both Florida and Landry fit well with a broader recognition of the importance of the cultural industries in the economy… Second, particularly in Florida’s formulation, the creative class thesis is not at odds with economic rationalist or neoliberal policies.’  However, they raise the concern that gentrification tends to accompany the attraction of the creative classes which raises housing and living costs, displacing a sub section of society. They conclude that it appears that ‘urban governance approaches seek to enhance’ the possible benefits of a creative city agenda but are ‘generally ignorant of those excluded from, or unable to join, the new economy.’[2]  So, while there are many benefits touted about building a creative city, the focus on economic gains sometimes means that we fail to see those that are marginalised by the aspects such as rising house prices.

Charles Landry’s work which is concerned with urban renewal is perhaps better suited to creatively solving the problems of a city such as Melbourne. Landry’s, The Creative City, written with Franco Bianchini in 1998 argues that creativity can and should be used to tackle economic and social problems. Landry states in a later interview, that all aspects of a city are required to contribute to sustainable cultural environment, not just a creative class. While people in the arts can provide content, it is those working in infrastructure that are key. ‘If content is to have any effect, you need creative logistics analysts, creative engineers, creative educators. Above all, you need creative bureaucrats.’[3] Perhaps along the lines of Landry’s argument, broadening the scope of who is creative, to insist that all roles need to be creative, could enable more diverse solutions to our cities problems.

The original idea of a creative city has its basis in the works of several thinkers of the 1980’s, notably Australian David Yencken in 1988 who described ‘The Creative City’, in an article of that name, published in the literary journal Meanjin.[4]  It was Yencken who paved the way for imagining Swanston Street closed to traffic when in 1985, he proposed that for Victoria’s 150th celebrations, Swanston Street should be turned into a giant green park. So, for one weekend, 13,250 square metres of grass was rolled out along four blocks of Swanston Street. Tens of thousands of families picnicked in a park that had previously been a bleak road in the centre of the city.[5] Yencken was offering a vision that this car ridden centre of Melbourne could eventually be made completely car free. This eventually happened, as after being restricted to traffic from 1992, Swanston street was made completely traffic free by 2012. This serves as an example of how Melbourne was a beneficiary of creative thinking that didn’t come from an artist, rather from David Yencken as secretary of the Victorian Planning Ministry.

Daniel Pink writes that the future belongs to a person who thinks like an artist, inventor, storyteller a holistic ‘right-brain’ thinker. For Pink, the aptitudes that will make a person successful will be those of design, story (listening and communicating), symphony (connecting various elements), empathy, play and meaning. Recalling Landry’s ‘creative bureaucrats’, it seems that deepening our use of these aptitudes in our work, whatever that work is, will enable us to connect with the bigger picture, solve the bigger problems. Perhaps this is the key; that we all remain creative, seek meaning, listen to the stories and communicate using stories, connect the obscure dots and carry empathy, so that we can find creative solutions to our city’s problems.

I recently had a  conversation with Luisa, a Studio Art student at MAC. She described creativity as ‘finding a door where you once only saw a wall’.  Applying this thought to our city, we are not going to fully realise what a creative city can be until we all look for a door where we only can see a wall.

[1] Rowland Atkinson and Hazel Easthope, The Consequences of the Creative Class: The Pursuit of Creativity Strategies in Australia’s Cities, 2009 The Authors. Journal Compilation © 2009 Joint Editors and Blackwell Publishing Ltd. 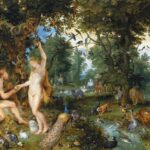 The Philosophy of Gardens