From the dense and wonderful Gareth Sansom survey exhibition at the NGV in 2017, A Forensic Possibility was one of my favourite works. Gary is a friend, mentor, and adventurous spirit that I have had the pleasure and agony of knowing since I started post-grad studies at the VCA in 1983. For me this painting shows a coming together of Gary’s searching intelligence, wit, appropriation of worlds and styles, craziness, fluent painterly technique combining a huge vocabulary of ways of putting paint down and an encyclopaedic sense of the history of painting.

A Forensic Possibility is spatially multidimensional with all its excavations pushing constantly back up to the surface. If you half close your eyes it appears almost black and white with a few blue and orange blobs and a hard zap of yellow at the top. The purple vertical smeary triangle thing harmonises the yellows with the inky dark blues. One sensation is always challenged by something mocking or at odds with it, such as the intentionally clumsy naïve drawing on viscous white threatened by the ultra sharp shards around the perimeter in their corporate yellows and array of flat office greys . The sharp white fractures, themselves a pure white abyss, on the far left lean with superiority into the brick red smear with its decidedly hand drawn rectangles that then echo the clunky steps in cool blues- a rhythmic metamorphosis with sensations of sharp control , badly lit stairwells and fleshy paint.

Highly focused, odd and intense, wrong handed with intent- what more could you want? Perhaps the loopy sausage stairs traversing the canvas, up or down who knows? So much pleasure from not knowing. It is essential to realise that Gary uses the “casual” but this is not a casual painting. The elements gain drama and the essential tension through their interdependency. The bigger truth is that paintings can contain anything, high and low. The artist strives to establish relationships between the parts. This is where the art seems to seep in.

In the flesh much of the paint is luscious, physical, energised to a variety of pitches. This picture enjoys its own wild ride. Compared to many other pictures of Gary’s this resists a central focus- my eye can wander at will. Apart from the steps there is no definite image to hold onto. I love the list of things I initially thought was an absurd shopping list but apparently derives from a film’s murder victim’s forensic report. Each word in the wonky stack forms a clear and simple image with a tactile resonance in the viewer’s mind. Paradoxically the painting has almost no definite visual images….unless we look down at the bottom section and discover small collaged photos of the artist caught seemingly in the throes of some mad existential play. Nice to note the perfect match of the masked figure with arm resting on the edge of the modernist square complete with soulful drips in the right bottom corner. The switch of languages is deft and exciting.

This painting is an accumulation of things found in the process of making. It is not possible to plan such an adventure. The paint and possibilities of space, image and colour lead the way and the artist follows. Light is the great activating force. The putting down of elements in turn creates the picture’s own appetite for development or elimination and then finding another way. I see Gary opening and descending one trapdoor then finding another. The painting establishes its own desires, the artist must submit.

Windows, gaps, apertures, perimeters, an accumulation of lushly painted grammar never getting to one point but many. Time is elongated and materialised into the picture. The clues keep appearing yet an answer is very happily not revealed. For me, Gary’s lifelong passion for cinema seems to come to a palpable moment in this picture, especially with the pitch black surround- the painting like a bright white burst onto the cinema screen before the celluloid jams and melts in the projector -the audience collectively catch an image, of what they don’t know, in the dazzle. 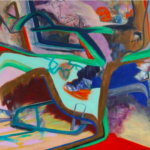 Grit and passion in a successful art practice

Privilege in the Art World—and Two Ways to Circumvent it