Alberto Giacometti’s painting of the writer Jean Genet, shows a figure isolated and deep within the framed space. If a portrait is about knowing the nature of the subject, then Giacometti appears to have consciously held back from bringing about any resolution. Or perhaps he knew not to try.
Painted with approximate dabs and lines that have been drained of colour, the figure of Genet in the painting is visually restrained and inaccessible. It is as if there is half-hearted struggle to represent Genet which stalemates into locating him instead. We as the viewers are here and he is there, but there is an impenetrable distance between.
This impenetrable distance typifies the ravaged twentieth century and a resultant struggle around identity and meaning. Whilst that century began with massive optimism about the technological achievements such as the electric light, the aeroplane and the motor car; within two decades those same technological achievements enabled slaughter on an industrial scale. Looking at this painting, I associate it with the experience of the debasement of humanity which began en masse a few decades before and has never really left us. In previous centuries, art displayed a certain confidence in being able to represent reality; whether it succeeded is beside the point. But most of the twentieth century was spent without an assurance about what reality was and how to find it. The location of ourselves in relation to others, the world and common values became, at best, approximate and speculative. It is from this speculation that I think Giacometti worked on his portrait. Genet’s outsider status, that of being homosexual and having formerly been a thief is also a consideration in reading this sense of distance; but distance, per se, is common to much of Giacometti’s work.
Giacometti’s figures are often alone, as they are in his work ‘Piazza’, where they appear to cross a town square, but no-one appears to connect or meet. Those isolated figures, emaciated but erect seem to indicate even more about the nature of the human experience. They are elongated, like some of El Greco’s figures which lift upwards, like the spire of a Gothic cathedral pointing to heaven. Giacametti’s figures seem to not belong entirely to the earth and if they do, they are not entirely earth-bound; in both senses of that last word. Whereas the cathedral houses and contains human figures, the twentieth century skyscraper by comparison isolates figures from each other in a drama which is beyond the human scale. Giacometti’s figures stand alone like the skyscraper, but also aspire to something grander and more meaningful, like the Cathedral. It’s an absurd contradiction that is present in the writing of Giacametti’s contemporary, Albert Camus who initiated the idea of the absurd. For Camus life is void of meaning, or an inability to know any meaning, if it were to exist. So the emaciated sculptural figures seem to indicate a hunger for, but an inability to have satisfaction in meaning.

For the remaining twentieth century there was much discussion about the operatives of power that led to war, colonisation, and genocide, especially power as it relates to language and culture. Those discussions have tended to deconstruct common narratives and meaning, and have enabled a new pluralism, which host multiple identities, narratives and meaning. So, meaning is now more individualised and tends to orientate around what the individual decides as one’s identity. So, in some ways our response to the absurdity described by Camus, has been to find meaning, and a cause, within our own tribe. However, the danger is that we do not connect, like the figures in the piazza. Finding meaning in one’s identity without considering how we must relate to others and difference, risks throwing us into a post-truth world. This is a world where there is no longer a reliable means to communicate across difference in a society; where how we govern is subject to the loudest voice or most popular cause of the moment rather than tested processes, and common values of discourse.
Written by Marco Corsini 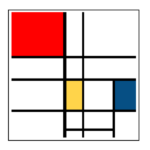 The Universal of De Stijl