The artist as thief or as innovator? Damien Hirst’s Hymn

Home / Blog / art / The artist as thief or as innovator? Damien Hirst’s Hymn

Guest blogger: Amy Davis
In 2000, Damien Hirst was ordered to pay an undisclosed settlement to the makers of a toy which he had copied, resulting in a massive sculpture with very little change from the original’s appearance. Hirst’s strategy is called appropriation, but what does this mean, and is it stealing or is it innovation? Appropriation in art is the incorporation of pre-existing images, ideas, or artworks with minor transformations or little adjustments to create a new work. Although appropriation has been used in various ways throughout history, it has now become a common practice for artists to remix and resample images.
Damien Hirst’s Hymn (1999), is an exact replica of Humbrol Limited’s Young Scientist Anatomy Set. The toy sold for only £14.99 while Hirst’s sculpture sold for one million pounds. Hirst has magnified the scale of the toy to a sculpture of about six metres tall and changed the materials from plastic to bronze, gold and silver. Hirst has also altered the art piece’s context from a medical toy to its placement in the contemporary art gallery. His minimal change of the original toy design resulted in a court case accusing him of plagiarising. Hirst was found guilty and was ordered to pay a settlement for his appropriation.

Whilst Hirst’s sculpture appears to merely be a copy, it also operates at a deeper level; referencing religion and art history. The title, Hymn, is a pun on the masculine pronoun and reflects a religious song or poem of praise to God or a god. This sculpture is obviously not a poem or a song, but perhaps could be identified as an image that reflects a representation of an object used in worship. The sculpture’s materials include bronze, silver and gold components just as in idol worship around the world, where it is common practice for statues to be made using the finest and most expensive materials, detail and precision.
Hymn also conveys a modern representation of ancient Greek sculptures. During the Classical Period, Greek sculptures rapidly changed from using various clays to metal elements in order to keep the shape of the figure, regardless of how intricate they were. Bronze became a popular medium to use as it could be steadied inside the hollow of the feet by using lead weights. Typically, Ancient Greek sculptures are nude, have their arms hanging close to the body, and were created in appreciation of the human anatomy, sometimes representing a god. Making the naked form the subject of many art forms showed the great skill and technique of the artist. Not only were these art pieces created using metal elements, but scientists have also discovered artists would sometimes also paint them, like Hymn’s bronze statue that has been painted.

From an aesthetic point of view, the experience of the now-massive toy design, significantly extends our understanding and perception of the original object. It does this by creating an entirely new context of size and location with which to appreciate the original design. The title of the work indicates that there is a conceptual consideration being encouraged in the viewer. Whilst Hirst’s Hymn looks like theft, and in some ways possibly is, it is also the innovative use of appropriation to create a new art piece that has its own scale, context and intelligently references religion and art history.
Guest blogger: Amy Davis 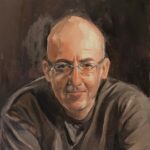 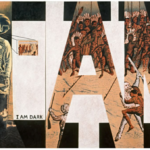 Identity and its refusal