Walking in the footsteps of Van Gogh

Home / Blog / Arles / Walking in the footsteps of Van Gogh

I was lucky enough to be in the South of France and visited Arles to experience the scenes I have admired for so many years in Van Gogh’s paintings. I would like to take you on a little walking tour through the city where Van Gogh painted Cafe Terrace, Starry Night over the Rhone, and the hospital grounds where he was taken after the ear incident.
In 1888, Vincent Van Gogh moved to a small town called Arles in the South of France with the aim of creating a school of art outside of Paris. He believed that his new, personal style could thrive outside the capital and contribute to what was the modern art movement. He also preferred to work alone and the prospect of a quiet, Southern town in France was where he felt he needed to go.
A short history of Van Gogh and Gauguin in Arles
Van Gogh rented the Little Yellow House in May 1888 (which was unfortunately bombed in WWII and no longer stands). Van Gogh painted prolifically during this time, and produced a number of masterpieces including his Sunflowers and Haystacks series.
Van Gogh convinced Paul Gauguin to join him, and he did eventually in October. However, Gauguin and Van Gogh’s friendship was strained; they debated often about their differing opinions of art. Van Gogh, who was suffering mentally which was exacerbated by his significant output of work, was not the easiest person to live with.
There are many theories as to what happened with Van Gogh’s ear: a battle wound from a violent altercation with Gauguin; an accident whilst he was shaving and suffered an epileptic fit; an action of ill mental health. What seems to be known however, is that he presented his ear to a local prostitute with whom had fallen in love with, as a last attempt to win her heart.
Van Gogh was taken to the local hospital in Arles, which is now L’espace de Van Gogh and has been kept as you see it in his painting. The hospital also houses some of his masterpieces.
Walking in the steps of Van Gogh in 2015
If you visit the tourism office in Arles you can purchase a map with a walking tour of ten famous scenes that Van Gogh painted. The thought of walking in the footsteps of Van Gogh and being in the real scenes that he painted was overwhelming; however the reality was somewhat less romantic. Arles is not the typical idyllic Southern French town; it was a little dirty, and a little smelly, which surprised me because I was anticipating the bright, moving scenes from Van Gogh’s paintings (which was over a hundred years and a couple of wars ago, so I removed my rose-coloured glasses).
It didn’t take long to forget about the state of the town though; retracing Van Gogh’s paintings around Arles was a bit like an artistic treasure hunt for me. Here are some of the places I found:
L’entree du jardin public

This was the first stop on the map. It was a strange feeling standing in the same scene that Van Gogh depicted in the painting. I took my time here to digest exactly what I was doing. I looked for details that weren’t there; I tried to match up positions of the trees and park benches, and turn the elderly men drinking into women in black dresses. I then just stood there and took in the feeling of the park, the shady refuge it provided in the middle of the town. Van Gogh certainly had a way of making something we consider ordinary, so moving.
Les Alsycamps

Les Alsycamps is a famous Roman necropolis and was Arles’ burial ground for over 1500 years. The walk down this long avenue of stone coffins to find Van Gogh’s famous scene had to be taken in slow, silent steps. Van Gogh and Gauguin painted side-by-side here and produced a number of paintings. Above is a particularly emotive painting by Van Gogh, which describes the vast space and desolate feeling of Les Alsycamps.
Garten de Hospitals

The hospital was an extremely moving place. You could not help but feel melancholy walking underneath the yellow arches. The gardens have been kept more-or-less the same as how Van Gogh described them in his painting, including the stunning blue irises. The hospital, now housing some of his pieces and a few touristy boutiques was eerily quiet, as people around me paid their silent respects to Van Gogh and his troubled life.
Le Cafe Terrace

I was quite star struck when I discovered this iconic scene. The cobbled streets no longer remain; there is an army of plastic chairs and tables in the foreground; the cafe has been renamed Cafe Van Gogh; however, you can still imagine Van Gogh painting this scene. This was the easiest image to visualise and also feel. There was a bustle to the streets, and the buildings had aged with the painting. I felt so lucky to be standing there.
The Trinquetaille Bridge

This was not the most pleasant place to visit in Arles, but I am glad I found the painting. The steps up to the left had large worn dips in them from hundreds of years of footsteps. The painting can be viewed as historical in nature and it also shows how Van Gogh can see a composition from such a simple scene. The light of Van Gogh’s painting, which was completed in October 1888 appears to be a lot different to how I saw it in early May. It would be interesting to come back during Autumn.
The Langlois Bridge

We had to travel a little further to see the bridge because it had been moved because of an expanding industrial area. Driving past the old site you could see an abandoned Van Gogh cafe, used when tourism for the painter had been booming, I assume. The bridge was important enough to reassemble down the river however, and I did run into another Van Gogh enthusiast.
There are a couple of towns around Arles with more scenes that Van Gogh painted, including Auvers-sur-Oise where he ended his life. I recommend visiting the scenes of painters you admire so you can have your own experience of a composition you have may have been looking at for a long time.
Written by Lauren Ottaway. 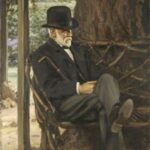