An inspiring start to Term 4 Painting

Saturday morning painting classes recommenced two weeks ago, and the work being produced by our early-morning artists is phenomenal.
Marco will be teaching us a variety of different painting techniques this term, which a number of our students are currently using. Below you can see examples of the students’ current pieces, which are all works in progress.

This is Lynne’s oil painting. She has chosen to work from a photograph and is using a “layering” technique with opaque colours, which also can be called a tonal painting.
Lynne has been with MAC for two terms now and continues her art practice in her spare time, which we like to encourage all students to do!
Marco will be demonstrating this “layering” painting technique later in the term.

To the right is Leigh’s current oil painting. She is working from still life, which Marco arranges every lesson.
Leigh has chosen a “blocking out” technique, using a local colour on the vase and a yellow underneath the apples.

Rivkeh has joined MAC this semester wanting to learn different painting techniques.
She is currently working on one of the busts we have here at MAC. Rivkeh began with a dead colour painting but has continued to model the form using the semi opaque and opaque white for the second layer.
You can see the burnt umber that she used in the first layer and it demonstrates how effective this painting process can be when creating shadow and variation in tone.

Last term we had a model sit for us and Spencer is continuing this work.
He has also used the glazing technique; he began with a monochrome underpainting and has since applied several layers of colour. He achieved the sensitive skin tones using glazing and layering techniques.
Spencer has been with us for two terms now and we are excited to be part of his creative journey!

Meagan is also working on her painting of the model from last term.
She also began with an underpainting, which has helped her achieve the skin tone (especially on his forearms) and his vest.
Meagan’s technique for painting skin in striking; when you get up close to her painting, the different colours on his face almost looks like patchwork, but as you can see, our eyes make all the colours work together.

Many students bring in current projects they are working on so Marco can offer feedback.
Jude, who has been with MAC all year, always has several paintings on the go, and we love seeing her progress.
She learns a considerable amount with every painting she completes, from the reflection of water on skin, to how to realistically paint cloth. Jude has been working on the painting to the right for a few weeks and at the moment she is working on the difficult task of painting a newspaper at that angle.
If you would like to watch the progress of these paintings, and works of art from our other classes, follow Melbourne Art Class on Facebook and Instagram. 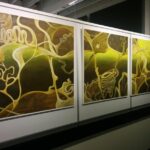 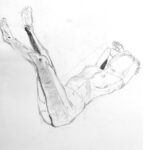