Exhibition dates: 4 – 17 April
Opening: 6 April 6pm – 9pm
Location: Brunswick Street Gallery
I began to reflect on the King River as a source. Its river stone beds and shallow streams, sometimes bubbling around arrangements of boulders, sometimes disappearing into deep, dark, still waters, which had never been beautiful to me when growing up and I had never thought of its significance in our lives beyond its supply of water. The river as a source which had branded a primordial sense of dependency and intimacy within me over my half lifetime. The river that constantly flowed, had always flowed, will always flow. The river that bound us around itself and preserved us. I slowly connected to the idea of source and slowly felt that my own dependency on this source was being revealed. That I had felt a need for years now, to constantly return to this source. I began to connect with the notion of origin and that just as I sat on the banks of this river or swam or drank from it, all I could ever do was draw close to it, to be within in, return to it. I had to return to this river. I have always returned to the King River.
From, Returning to the river, Marco Corsini, 2016 Marco Corsini’s paintings feature the landscape and his immediate environment. Using shifts in viewpoint and perspective and often painted over extended periods of time, the works explore perception and the nature of painting as a recorder of experience rather than as a representative tool. Alongside a phenomenological interest in consciousness and experience, Corsini’s work also incorporates personal motifs such as the horse, indicating the artist’s own presence. The paintings explore perception and subjectivity, asking us to go beyond everyday discourse into deeper engagement with the nature of our existence.
Originally published on Thursday, 29 March, 2018 by Marco Corsini 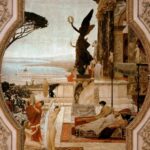 Getting the attention of your crush in 1908