Autumn is one of my four most favourite seasons. It has a definite transience compared to summer just passed; though fleeting it may seem, its transformative impact on the environment around us is powerful.
Autumn may remind us that we are in a constant state of flux; each new moment an opportunity to be reborn, to change. It may open our eyes to see the deep, rich reds, purples and browns again; the vivid oranges and yellows – the spectacle of colour which almost seems surreal. It may enliven our senses after our dry summer; brown leaves and acorn hats crunch underfoot one week, and the next they’ve formed a sodden, musty-smelling part of the path we avoid walking on for fear of slipping.
This wonderful, sensory-overloaded season has been celebrated on artists’ canvases for centuries. Here are just a few which will hopefully inspire you to capture your impression of autumn in your work.

Georgia O’Keeffe was an American artist and has been often referred as the Mother of American Modernism. Her art career spanned more than 60 years and she is most well-known for her paintings of enlarged, close-ups of flowers, New York and New Mexico landscapes. This painting, Autumn Leaves, forms a body of work she created between 1922 and 1931 whilst visiting Lake George and collecting leaf souvenirs (amongst other organic subject). She created 29 paintings of leaves, revering their varying shapes and colours.

Monet is known for capturing fleeting moments of light – and this painting of the river with Argenteuil slightly off centre on the horizon is a masterful example. Monet has captured the turning of the leaves, using the reflection of the river to enhance the changing colours. The strokes of paint on the river make it look like an autumn palette – with the buildings and clouds mixing with the violet and blues. It has been speculated that Monet most likely painted this image from his studio boat, which he used to row along the river of Argenteuil. This painting was shown in the first Impressionist exhibition in 1874.

Cy Twombly’s work is based on two components – paint and line. The line in his later years took on the form of text and indecipherable scribbles. The energy of his paintings is created with smears, daubs and drips and this painting in particular, Quattro Stagioni: Autunno, is one of a series of four paintings depicting the seasons. The idea for this body of work was inspired by Autumn, during the wine harvest in Italy, where he spent most of his life. Measuring over three metres in height and more than two metres in width, light is the principal theme, with the prominent use of white. Twombly pinned the four pieces to the wall and applied colours individually, and let them drip down the canvases. Autunno is the most vivid of the four paintings, with deep, rich reds, greens and purples.

Arthur Streeton was a key figure in landscape painting and The Heidelberg School (Australian Impressionism) in Australia. Streeton did not have any formal training, and only after he became friends with artist Tom Roberts did his career develop. He worked en plein air, and painted the light, heat, distance, and space of the country. One of Streeton’s main influences was Willian Turner, which can be observed in the work above. The striking, golden leaves celebrate Autumn in this beautiful snapshot in time captured on Streeton’s canvas.
Written by Lauren Ottaway. 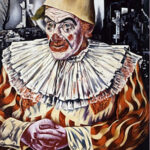 The clown in the ruins